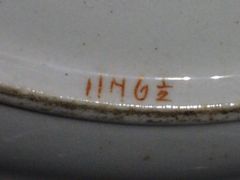 In this Category will be posted the basic clues to identifying a piece’s age, country of origin and maker/manufacturer. I am sure that, as the site develops, there will be many pieces incuded where the manufacturer’s name is written on the bottom – but what is not always clear is the age of the piece…

Most people will recognise that:-

1) when a piece is clearly marked in English with its country of origin then it was almost certainly made after 1891. The word “England” on its own suggests that the piece was marked after the 1891 McKinley Tariff Act (a few pieces were marked in anticipation of trade restrictions – but almost all are post 1880)

2) Pieces marked with “Made in England” tend to indicate that they were made after the First World War.

5) The word “Royal” on a piece suggests that it is likely to be Victorian, as does the diamond registration mark.

but what about the pieces with registration marks? Are you comfortable about reading these? If the piece is only marked with a squiggle or a crown – or only a few numbers – are you confident that you know the manufacturer?  Articles added over the next few weeks will start to answer some of these questions…

20 thoughts on “Identifying Age and Makers – The Basics”